Lemme tell you how much I payed in rent: too damn much that’s how much. It’s really a shame that in cities like New York, people can’t live reasonably. Manhattan? Forget about it. Brooklyn? Those hipsters pay a pretty penty to be cool and trendy. Everywhere else? Still expensive as fuck.

You Know You Want Summa This

Sometimes, when it’s late at night I get hungry. So I take my greedy self  to the nearest kitchen or corner store in whatever I happen to be wearing. So I see no problem going to get my late night snack in my footie pajamas. AND enter the judgment. People looking at me all sorts of crazy. What? I didn’t look that bad.

That train was forever trying me. Like I don’t understand why it was neva eva eva on time. Someone please explain it to me.

Because I was an intern at a fashion company that shall remain nameless, I was surrounded by fashion girls. Some of them were super nice awesome people. The rest were the most self important and egotistical people I have ever met.  I sat at an office lunch and listened to the entire staff make fun of someone for being a cosmetologist. And there I was sitting and thinking, “I always wished I could do hair”.

I hate fuckin birds. Like fo real. They are gross. And I especially hate pigeons. Rats of the sky. In the words of ms. raven simone, “ya nasty”.

6. People on the Train

Every single day, either on the train or in the station, someone would tuhhry me. Especially the people who would STAND on the left side of the escalator. WHYYYYYYY GOD WHYYYY??? 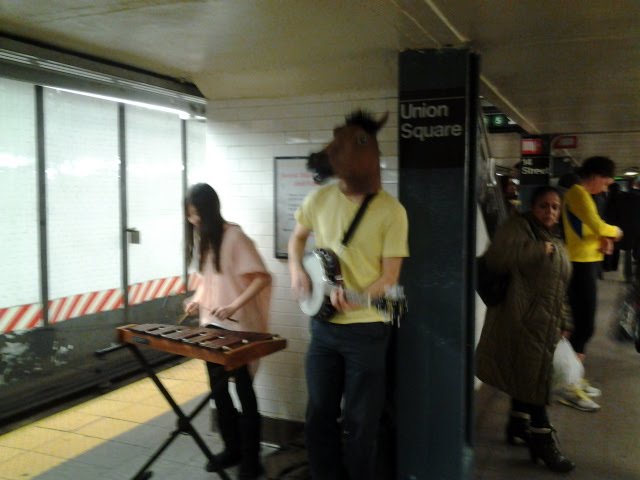 I for real saw this shit

I love to eat good food. It’s a past time of mine so when I git to the city I had a foodgasm. I was in heaven for real. So I ate everything until I realized my jeans were fitting a little snug. Then I went and got on the scale in the mailroom of my job and imagine my shock when I was big as a house. True story y’all: New York made me fat.

I would say for the most part New Yorkers aren’t rude, they’re just busy. They have places to go and people to see and you need to get out of their fucking way. Stop to talk to one of these people and they’re probably pretty swell but mess with their morning commute and lose a limb. It be like that sometimes.

Listen, I appreciate a compliment from a man (or woman) on most days but the men in New York DID THE MOST. A man (who I’m going to assume was residentially challenged) once followed a whole block and halfway down the subway steps asking if he could take me home. No sir, you may not. For a variety of reasons.

I had friends in NYC, but I still felt really alone. It made me sad and I was overwhelmed so after about 7 months I pached my stizzle and came home. NYC, It was nice knowin’ ya.